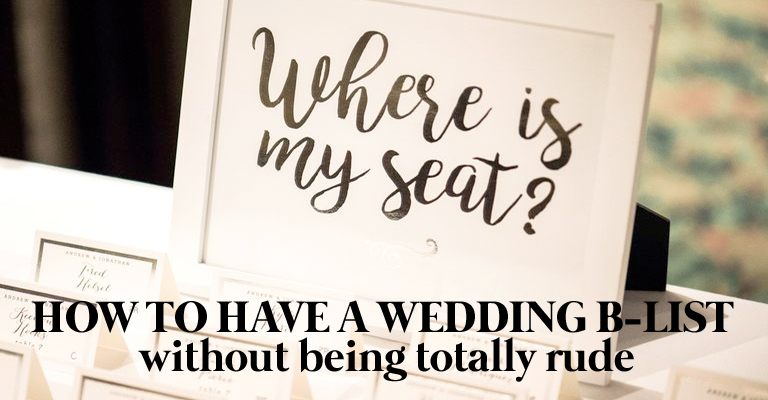 How to Have a Wedding B-List (Without Being Totally Rude)

Yes, it’s a cringe-worthy topic, but most couples will need to deal with it sometime during the planning process: the wedding guest B-list. If you’ve begun compiling your guest list, you probably already have one—that list of people you’d love to invite … if only you didn’t have to invite your great-aunts, your dad’s golf buddies and a slew of significant others. But every venue has a max capacity — and every budget has a breaking point — so inviting everyone you know and love isn’t always possible. Enter the B-list.

First things first: No, it’s not totally rude to have a wedding B-list. It’s very common to have a group of people you’d love to have at your wedding, but who don’t make the cut for space or cost reasons. And it’s also possible to extend your B-list a belated invitation withoutbeing offensive. It just takes a bit of planning and a lot of tact.

When you make your wedding guest B-list, organize it in terms of priority, or who you’d like to invite first once your “no” RSVPs start coming in. And try to invite close groups (like work friends, for instance) at the same time to ensure that people won’t be comparing who was invited when. You don’t want anyone to realize they were invited later than everyone else.

You’ll also want to make sure you send out your B-list wedding guests an invitation before the original RSVP date has passed. (Giving B-list wedding guests only a week or so to RSVP is a giveaway that they didn’t make the A-list cut.) Think about printing out two sets of RSVP cards—one for the A-list, and one for the B-list with a later RSVP date. Have your A-list RSVPs due around eight weeks before the wedding, and set your B-list RSVP deadline about three weeks before. This gives you enough time to get a solid guest count, and it won’t tip off B-listers — all without breaching the rules of wedding etiquette.